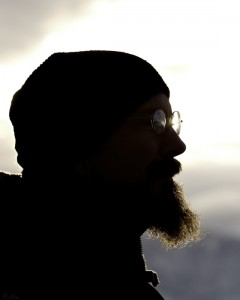 It seems that I have always had an interest in photography, cameras, telescopes, astronomy, and of course trains. My father was a photographer in the U.S. Navy in the latter part of WWII-I have the Speed Graphic camera he used-so one may surmise that photography is in my blood.

I took all the classes in photography I could in both high school and college and at one point had a small home darkroom for developing and printing B&W.

I was hesitant at first to embrace the “new” technology of digital photography but once I finally took the plunge, I found that this technology increased my level of creativity. While there are those who may scoff at digital work, or the idea of manipulating the image digitally and offer that it is not “right”, (this is an old and I feel pointless debate as there is no “right” answer) I do not have a problem with manipulating an image and trying to get every bit of information present and show it in the best possible manner.

The interest in astronomy and telescopes parallels that of photography and as a teenager I was putting a camera (a 35mm Olympus OM1n) on a telescope in an attempt to photograph the moon and brighter planets. This morphed into a quest for bigger telescopes and darker skies and in both college and graduate school I had several out of the way and very dark sites( the middle of nowhere, literally) where I would camp for a week and photograph the night sky with a 35mm camera and an 18” telescope.  When one is young, one can stay up all night.

As cameras transitioned from film to digital, astrophotography went digital as well albeit with specialized cameras. For astrophotography, the exposures are generally 10 minutes each through a clear, red, green, and blue filter and combined to make the final image. The total exposure times for some of the dimmer objects can be over 12 hours! All the while the telescope is tracking the object and making small as needed corrections for guiding the telescope to ensure that the stars are round pinpoints. With various software packages it is now possible to write a few simple commands and the telescope will run-automated and unattended-all night-capturing images and downloading them to a computer. This greatly facilitates sleep for the astronomer!  The technology has improved to the point where an amateur astronomer can today capture images that rival those of professional observatories 50 years ago.

I have always loved trains, especially steam trains. When I was quite young, trips to Disneyland and Knott’s Berry Farm (not far from where I lived in Southern California) would have me sitting watching the trains! There was a neighbor of my grandmother’s when I was growing up who was a brakeman on the Denver and Rio Grande Western in Colorado and New Mexico and he would tell me stories of when he worked for the railroad.

There was another neighbor who also loved the narrow gauge and he had a collection of stories and photographs. I was hooked! As I have gotten older, I have the ability to go and photograph the remaining portions of the narrow gauge (narrow gauge refers to the distance between the rails. Standard gauge is 4’ 8 ½”, narrow gauge is 3’. Narrow gauge was cheaper to build, with smaller and cheaper equipment operating on it). There are two primary portions left, the 45 or so miles between Durango, Colorado and Silverton, Colorado (currently the Durango and Silverton Narrow Gauge Railroad) and the 64 miles between Chama, New Mexico and Antonito, Colorado (Cumbres and Toltec Scenic Railroad). Both of these railroads still operate steam locomotives built in the 1920s and they will run occasional photo charters where the equipment is lettered to look like a train from say the 1930s. Some of the charters will have night photo sessions as well where various scenes are recreated.  Another component of this is that I have setup and run several night photographic sessions.  These can be a lot of work to not only plan but implement as I try and do something that has not been done before.  With a limited number of operating steam locomotives, this can be a real challenge.